GEDEON PROGRAMMES won the “BEST MULTI-PLATFORM FACTUAL PROJECT” award for all its productions on POMPEII at the WCSFP 2020!

At the 2020 event, the WCSFP (World Congress of Science and Factual Producers) a community of 1,200 international broadcasters and producers, presented 15 awards celebrating excellence in science, history and factual storytelling.

GEDEON Programmes was nominated twice in the categories, Best Multi-Format Project and Best History Film, for its productions on the new Pompeii excavations. 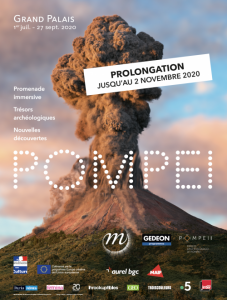 It is in the first category that GEDEON Programmes received the BEST MULTI-PLATFORM FACTUAL PROJECT award:

– The 90′ and 2×52′ documentary ” THE LAST HOURS OF POMPEII ” directed by Pierre Stine, produced in association with France Télévisions and co-produced by GEDEON Programmes with the Pompeii Archaeological Park, CuriosityStream, NHK, AT Prod, RTBF, RAI, EBU Coproduction Fund, Cinémage 13 with the support of Media Creative Europe, Procirep Angoa and the CNC. The film, which had a record audience of nearly 1.9 million viewers when it first aired on France 5, was broadcasted in more than 50 countries around the world.

– The immersive exhibition “POMPEII” which took place at the Grand Palais – Paris from July 1st to October 28th, co-produced by GEDEON Programmes with the RMN-Grand Palais in association with the Pompeii Archaeological Park. This exhibition designed by scenographer Sylvain Roca with director Olivier Brunet attracted more than 200,000 visitors despite the sanitary conditions.

– The VR “POMPEII” experience designed by director Ferdinand Dervieux, and co-produced by GEDEON Programmes with UBISOFT, with the support of HTC VIVE and the Creative Europe programme, and the RMN-GP.

– The educational web series of 12 episodes of 4′ ” POMPEII, IN THE FOOTSTEPS OF THE ROMANS ” directed by Théophile Leylavergne, and co-produced by GEDEON Programmes with France Télévisions, Inrap, Réseau Canopé.

GEDEON Programmes would like to thank all the partners of this extraordinary adventure of multi-format production and is already working on the development of new projects for 2021/2022.